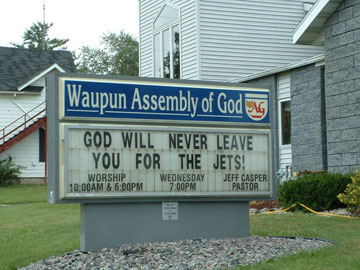 There’s no doubt Brett Favre is and always will be an iconic figure in Green Bay Packers lore. However, there are also some bad feelings floating around Titletown these days.

I had a chuckle at the image above.

Meanwhile, in Waukesha, a family burned all of their Brett Favre memorabilia. They even went so far as to create an intricate video detailing the experience.

At the end of the video, which is no longer available, a concerned fan asks Packers GM Ted Thompson this intriguing question: “Why would yoou wanna quarterback like Rodgers, whoo da only place he’s gonna take ’em to is da toilet bowl, and den ya got Brett Favre, whoo’ll take dem to da… Super Bowl?”

Dat is a tuff question der, my friends. Let’s hope we figger dat one oot!